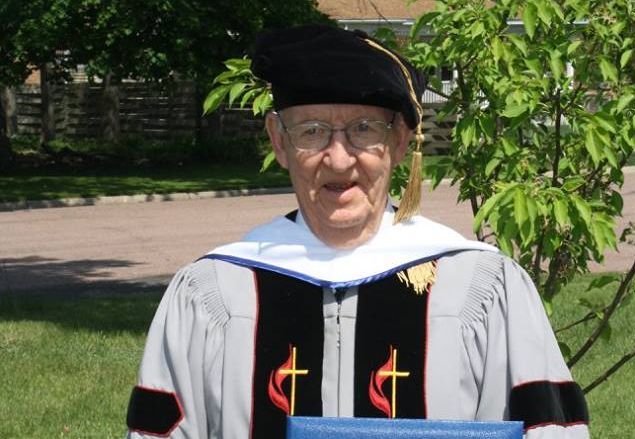 My father, Boyd Blumer, started from humble beginnings.  The farm where he grew up was modest, farming less than one section of land to feed a family of seven.  He began his education in a one-room school house that he walked or rode horse to and from (allegedly in waist deep snow, uphill, in 80 mph winds) each day.  Worship and the life of the community was a simple, white clapboard church on the prairie. He was the first in his family to attend college.  First to become ordained as a pastor.

My father was a product of deeply religious parents and a supportive family and community.  He moved away and moved on, but holds deep roots with both.

Dad started his ministry and family in a small town in North Dakota.  Then moved south to serve in churches from some of the smallest to the largest (at the time) church in South Dakota. He was appointed as a District Superintendent and was the only one to complete a full six year term in the district. They finished their formal ministry by spending two years coordinating ministries on the Rosebud Reservation.  From a tiny high school to Westmar College he went on to complete a Masters of Divinity from Garrett-Evangelical Theological Seminary, Evanston, IL and later a Doctorate of Ministry from McCormick Theological Seminary, Chicago, IL.  Recently he was honored by Dakota Wesleyan University with an Honorary Doctorate of Humane Letters.