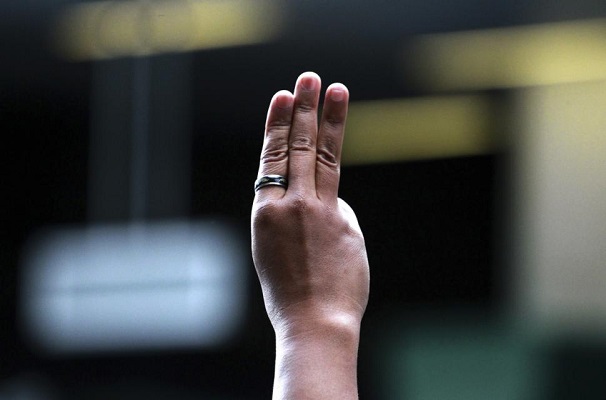 We went to the second installment of the Hunger Games, the movie entitled Catching Fire. This is a three book series that has now been made into movies. The storyline is gripping and in many ways shows how revolutions are created.

An oppressive government has a competition where people fight until all but the winners die. People are beginning to take a stand against the violence. A sign was given – three fingers on a raised hand. First by an old man and then others that showed discontent. People were punished and ultimately killed for raising three fingers as a sign of ‘we need something new.’

What is my sign? What is it I’m willing to take a stand for?

This past few weeks I was investigated by Western Union for sending so much money to Haiti and the Dominican Republic. It was a tedious process of proving that LaGonave Alive (a nonprofit we established to support projects) was an actual mission organization, spending a lot of time on the phone with WU, scanning and forwarding many documents, and having people send pictures of receipts (which is especially difficult in Haiti). On one hand it’s good to know people are monitoring funds being sent to other countries. But it was a tiresome process.

In hindsight, maybe it helped me form my sign. Something I’m willing to take a stand for – helping channel money to good people with big needs.

I received this note from Rev. Kip Roozen, a pastor in Sioux Falls SD.
“We should all be investigated for being generous. Once in Spearfish, the Youth Group went door to door collecting canned goods for the Food Pantry. We had borrowed shopping carts from the grocery store to use. One of our Youth got stopped by the police. Stopped for doing good!” The youth group with the sign of the shopping cart!