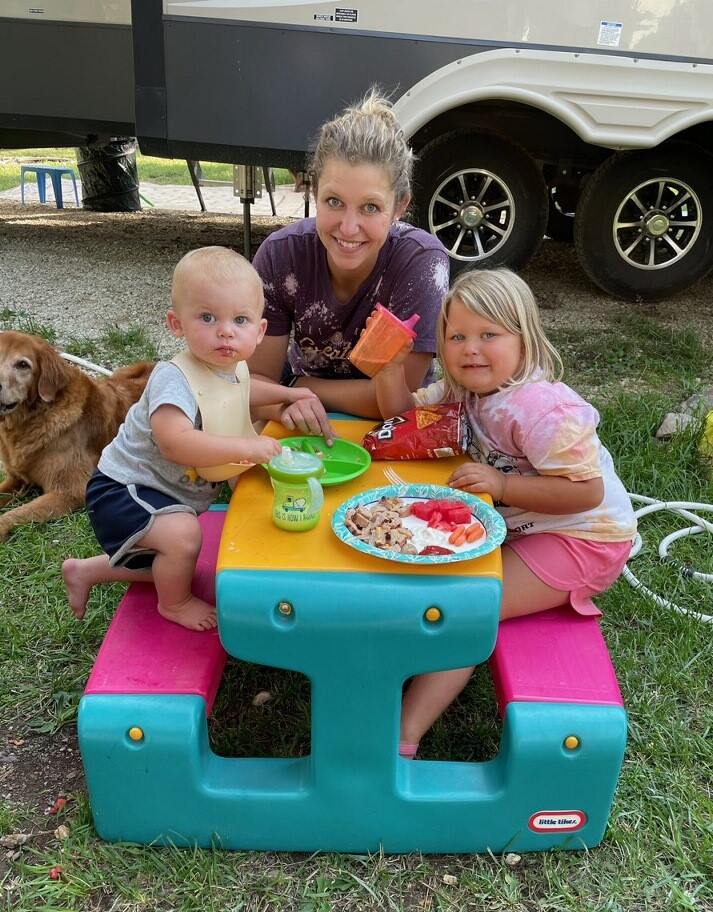 My family was packing up and getting ready to go camping for a week-long trip out in the Black Hills. My four-year-old daughter, Addy, had just finished her medication that she was taking for an infection. I was excited that we didn’t have to bring the bottle of medicine along with us.

We made the drive to the Hills, got everything set up, and were ready to camp for the week. Three days into our trip, Addy started to complain of an upset stomach, headache, and fever. These were the same symptoms that she had two weeks ago when her infection started.

She laid in bed most of the morning, and in the afternoon, I went to lay with her. She was so drowsy and felt hot. I had given her some medicine to bring her fever down, but she was just miserable.

As I laid with her and held her hand, I prayed. I asked God to use His mighty power through me to help Addy feel better. As I was speaking these words, I could feel God’s power course from my hand to her hand. Her eyes bounced open, and her body shook. I knew right there in that moment that the Holy Spirit had touched Addy.

It was early one weekday morning in the middle of May. I had gone downstairs to work out before getting ready to go to work. Every morning was the same. I would begin reading through my daily devotional before starting my workout, but this morning was different.

My husband, Logan, and I were ready for another baby to join our family, but it was a struggle. Months of trying for our second child had passed and it was weighing heavily on me. I opened my devotional and started working through that day’s devotion, which was on prayer.

I wrote out my thoughts and began praying. I asked the Lord to help me through these challenging times, to give me a sign or an answer to know if we were able to have another child. The second I prayed those words, I felt a presence in the room, as if someone was standing right behind me. I felt a touch on my shoulder and a whisper, “I will take care of you. Be patient and trust in Me.” I immediately turned around to see who was standing behind me, but no one was there. Tears streamed down my face as I realized that the Holy Spirit was right there with me.

It was a weekday morning; I was at work and Addy was at daycare. I received a text from Addy’s daycare provider asking if I had any news to share with her.

The daycare provider replied back letting me know that Addy had shared some news with her. Addy told her, “My mom has a baby in her tummy.” She said that Addy had woken up from her nap and was adamant about it and told the other daycare kids. The kids even cheered.

Our daycare provider wasn’t sure if she should believe Addy, but there was no maybe. So, she asked Addy, “Okay…does she have a boy or a girl baby in her tummy?”

I picked Addy up from daycare that day, the kids applauded when I came to pick her up. I said, “I don’t think so kids” and we laughed about the story. I told many family members about Addy’s “prediction” and we didn’t think much more about it.

A week later, I found out I was pregnant. Logan and I didn’t find out the gender until the baby was born, but we did have a boy.

I do believe that the Holy Spirit spoke through Addy that day. The waiting and struggles we went through for our son, Mason, to be conceived were long and wearing. I think the Holy Spirit used Addy to give us hope for another baby to join our family.

One thought on “Tell Me Your Story #5”