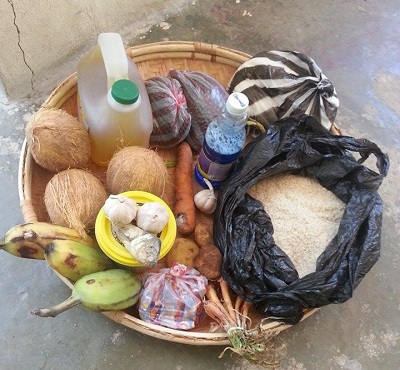 At the beginning of our staff meeting this week, I asked each member to share their favorite Thanksgiving food. Dressing was high on the list, but a surprising number of mixes were listed. Mashed potatoes, corn, dressing, and gravy seemed to be a beloved combination.

So I got thinking about things to eat. Growing up in a parsonage means that I have attended an inordinate number of potlucks. I’ve eaten enough Jell-O salad for two lifetimes. Tator tot hotdish, baked beans, brownies, and scalloped corn were among the customary offerings.

My mom will deny this, but she used to mix cereal as the box was nearing empty status. The Wheaties, Cheerios, Captain Crunch, and Apple Jacks dust blend was disgusting. Seriously disgusting. She also tried mixing powdered milk with regular milk. You weren’t fooling anyone, mom.

I was an exchange student in Ghana when I was in high school, which offered me the opportunity to eat snail (not the escargot type but the larger than your fist type), goat, and fufu, which is cassava pounded into a gooey mess and dipped by hand into a goat, snail, or fish soup.

Looking back at my childhood there were regular meals that were fairly modest. Pretty sure it was the result of a pastor’s wife trying to feed four mouths on a pastor’s salary on non-potluck days. I eat too fast, and I’m using the excuse of trying to get more than my one-sixth share. If you know me or have seen me, you likely know there isn’t much food I’ve pushed away from the table. While I’m not a big fan of wild game or fish, I’ll try anything once.

During Thanksgiving, when you arouse from your tryptophan-induced coma and have had enough pumpkin pie that you’re turning a lovely shade of orange-brown, remember to be grateful for the many things to eat. And remember those that won’t eat today.