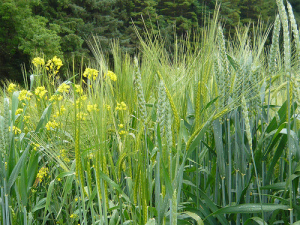 As I have begun to read parables and read about parables, I have a couple observations.  First, that Jesus guy was one smart dude.  He made the stories simple enough to be understood by children and profound enough that they’ve been studied for centuries. Second, my understanding of parables is more at the children end than the studied end, but they certainly are challenging.

I’m pretty sure the parables were calls to action, not just ideas for a flannel board or the children’s sermon. We easily push aside the teachings because it was those Pharisees or disciples he was correcting. Or maybe it was and is us.

There was a parable that I read that I can’t remember ever hearing about from the pulpit.  The Parable of the Weeds.

Matthew 13: 24-30 NIV
24 Jesus told the crowd another story. “Here is what the kingdom of heaven is like,” he said. “A man planted good seed in his field. 25 But while everyone was sleeping, his enemy came. The enemy planted weeds among the wheat and then went away. 26 The wheat began to grow and form grain. At the same time, weeds appeared.
27 “The owner’s slaves came to him. They said, ‘Sir, didn’t you plant good seed in your field? Then where did the weeds come from?’
28 “ ‘An enemy did this,’ he replied. “The slaves asked him, ‘Do you want us to go and pull up the weeds?’
29 “ ‘No,’ the owner answered. ‘While you are pulling up the weeds, you might pull up the wheat with them. 30 Let both grow together until the harvest. At that time I will tell the workers what to do. Here is what I will say to them. First collect the weeds. Tie them in bundles to be burned. Then gather the wheat. Bring it into my storeroom.’ ”

J Ellsworth Kalas in his book Parables from the Backside, has an interesting take on this parable. What is our reaction to the weeds?  Well, we want to get rid of them! Our world is a place where plants and weeds grow together, but what may look like a weed may just be an immature wheat plant. So our reaction to the weeds may be setting up rules or keeping our farm small so we can control what is happening.

I wonder what I have done, what our churches have done to sew weeds into the fields? What rules have we enforced to make ourselves feel comfortable in identifying those that are the weeds and those that are the wheat? What have we set up that looks like we’re inviting others in, but in actuality has served to pluck a young wheat plant? When have we stayed too small and not allowed ourselves to be God-sized?