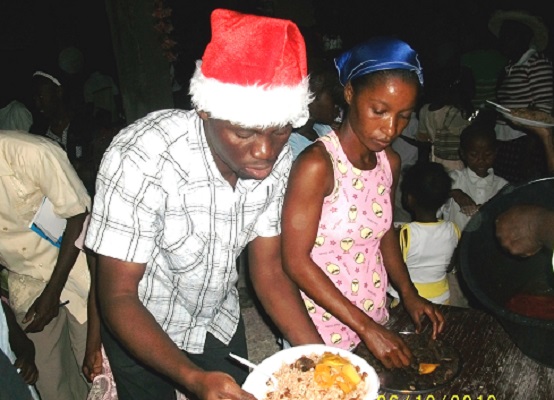 This week William Hyppolite is visiting us in the U.S.  Some of you know his story, but think it is worth telling.

In 2008, missionaries Shirley and Joe Edgerton introduced our mission team to a student named William Hyppolite on the island of LaGonave, Haiti. They believed William had great potential.  He was an orphan, being reared by his uncle, but who had dreamed of becoming a doctor and returning to serve the people of Haiti.  In Haiti, being an orphan is not a good thing, but they were right – William is a special young man.

Our church made arrangements for William to attend medical school in Port-au-Prince, the capital of Haiti.  He was with our medical-mission team serving on LaGonave when the earthquake hit in January 2010.  The earthquake destroyed his school and many of his fellow students and professors were killed.  If he had been at the school, he likely would not be alive.

William now lives in Santiago, Dominican Republic, and is attending UTESA medical school.   He lives frugally, studies hard, and when he returns he will be in his fifth and final year.  This was only possible due to generous churches and generous sponsors.

I have learned much from William:

Persevere.  An orphan from Haiti has very little chance of success.  Many are abused, sold into slavery, or die from lack of food or medical care.  William has survived many challenges.  He has shown how to persevere against all odds.  He taught me to stick with what’s worthwhile.

See the world through new eyes.  It is wonderful to see our country through William’s eyes.  He is amazed by how much land we have. Seven countries the size of Haiti could fit in the state of South Dakota.  William can’t believe how quiet it is here.  And he’s surprised that we have a machine for everyday tasks – dispensing soda or juice, mowing the yard, washing our dishes, opening the garage door, and so on.  On his first trip to the United States he said to me, “Now I know why people don’t want to go back to Haiti.”  William taught me to look at the world with new eyes.

Dream big.  William’s sisters said that even as a young boy, William wanted to be a doctor.  When our church committed to sponsor William in his medical education, we did so on one condition – that he return to serve the people of Haiti.  That was easy for him to agree to, since his dream has always been to serve women and children on the island of LaGonave.

Give back.  William says all the time, “God watches me, and he always puts someone in my way to help me.” William taught me to be that someone in the way.   William had an idea to start a Haiti Children’s Christmas so kids could get a meal and small toy on Christmas Day.  Last year over 650 children showed up.  Someone needs what you and I have to give.  God is calling us to give back.

What’s next?  Who knows, we’re living a dream.