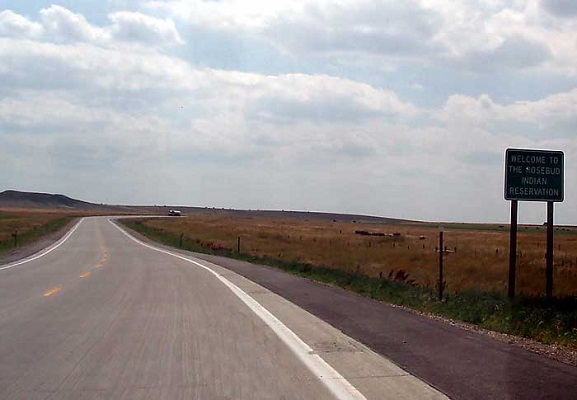 For those of us who don’t think God has a sense of humor or that God doesn’t teach us, we aren’t paying attention.

A couple years ago I was driving on Highway 18 on the Rosebud Reservation. I came over a ridge and saw something along the side of the road; it looked like a person but was moving strangely.  As I got closer I realized it was a man, with a cane, who had great difficulty walking and basically bobbed back and forth from leg to leg.  It was very cold and windy and he was hitch-hiking.

So I began to play the game of “why I can’t pick you up.” I’d been traveling and my car seats were filled with stuff. I don’t know this person. Could he even get in my car as his legs looked stiff, maybe he had some kind of appliance. I’d had a bit of a scary experience once with a hitch-hiker when I was in high school. Surely there would be other cars behind me on this lonely, desolate, freezing-cold stretch of highway in the middle of nowhere. And I drove on.
My destination was Mission, SD. I was asked to serve on panel that was hosted by Tree of Life Ministry, but was a process to get community members to organize and plan for their own future. My role was to talk about foundations and fundraising issues.

Over a cup of coffee, I met with the coordinator for this process and we talked about his expectations for me and this project. We talked about the tough issues of isolation, prejudice in our communities and in our churches, and trying not to make this just another plan that led to another false hope.

About an hour or so later a woman appeared at the door of Tree of Life Ministry with a man. A cold, hungry man who had a very distinctive walk. A man I’d left at the side of the road. A man that ended up in the very same place that I ended up.

Then God showed me how people are meant to be treated in the form of the directors of the ministry.  They simply did what they always do – they fed the man, gave him warm gloves to wear, and looked for a place for him to spend the night.

Of all the places that man could have ended up, he ended up in the right place. With warm, caring, loving people – and a man who got a lesson and who passed by an opportunity to be Christ.