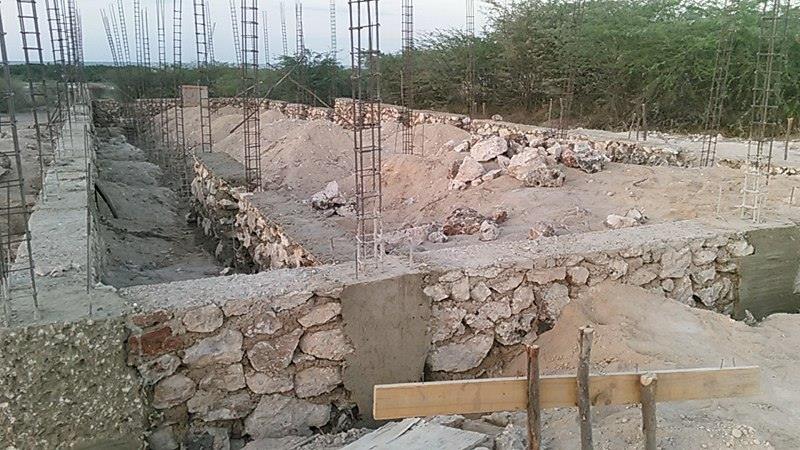 Our team just returned from a trip to Haiti. In addition to being a fun group, we actually got some work accomplished. The main purpose was to begin the building of a school. We dedicated the Rob Marchand Education Center, in honor of my good friend who passed away a couple years ago.

It is a BIG project. Maybe GIGANTIC. Maybe it is simply GOD-SIZED. The school is being constructed to eventually be a two-story building, but we are focusing on finishing the first level with five classrooms.

Due to the design of two floors, the footings went deeper than I expected and a lot of work went in to digging the foundation with shovels. Then rock and concrete had to be carried in by hand. Cement mixed with shovels and carried in buckets. Metal frames for the columns had to be cut and assembled piece by piece. Hard, difficult, tedious work. Our Haitian friends work from 7am to 5pm for $8 and a lunch. It was fun to work alongside these tough, fun-loving people.

Our team developed some great new relationships. While on the worksite, it is very common for workers to call us boss. We are the ones providing their salaries and we don’t work as hard. Whenever one of the workers call me boss, I respond, “Pa boss, ou zanmi.”  Not boss, you’re friend.

John15: 13, 14
13 Greater love has no one than this: to lay down one’s life for one’s friends. 14 You are my friends if you do what I command. 15 I no longer call you servants, because a servant does not know his master’s business. Instead, I have called you friends, for everything that I learned from my Father I have made known to you.

Jesus opened a big door for us. That we do not have to be silent, faceless servants – but we are partners with God.  But that partnership has demands. So much so we might actually prefer to stay as servants. As a friend, he has made teachings available to us, but that also makes us accountable for those teachings.

This was an emotional week for me. Not only the usual tiredness, adjusting to different foods, working in the sun, and other expected and unexpected events in a trip to Haiti. We dedicated a school in the name of my best friend. It is overwhelming to see there will be a finished product some day. It’s frustrating that there was some miscommunication on my part that led to extra work. It may take some time to complete this school, only building as we have funds available.

As I helped dig the foundation shovel by shovel. As I carried bucket after bucket of rocks or cement. As I tried to keep up with my fellow workers, I had a great memories and connection to Rob. I know we’ll get this done the very same way – slowly, methodically, determinedly – until the first student sits in a desk waiting for the class to begin.