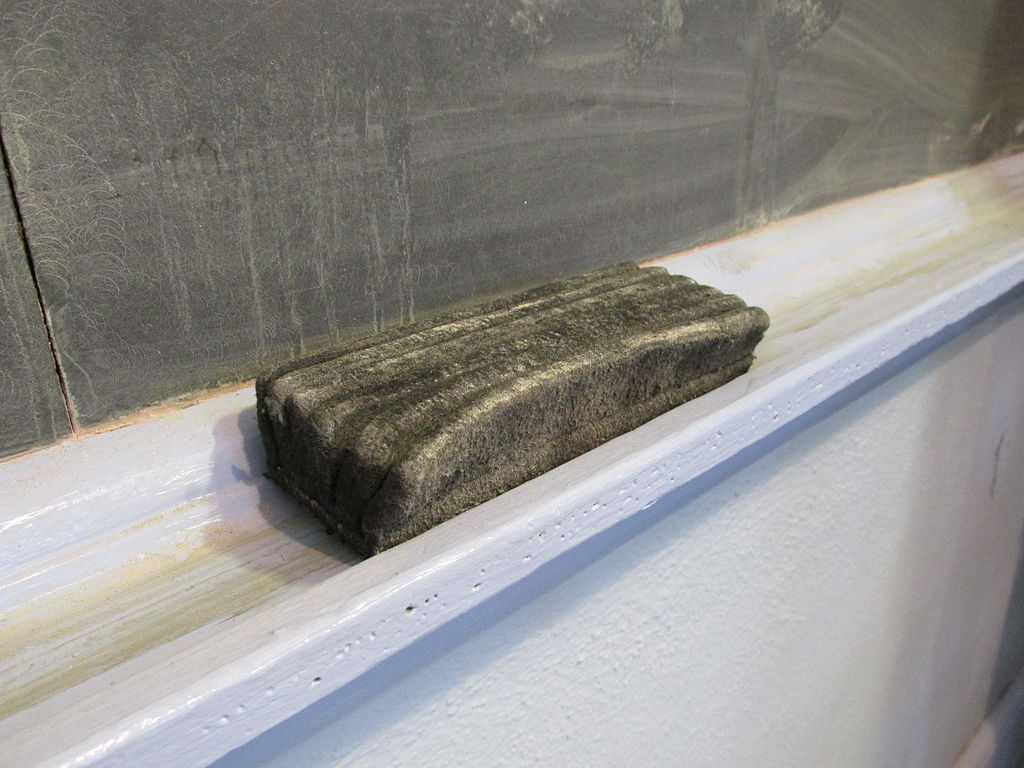 In elementary school, one of the classroom chores was cleaning the chalkboard erasers. More appropriately, beating the chalk out of the erasers. Usually at the last recess of the day, one or two people were assigned to take the erasers outside and beat them together to remove the chalk dust.

We had two types of erasers, the black felt erasers with two white stripes and the long erasers that were like hard foam rubber with a material covering. These were for big mistakes or to clean large areas of the chalkboard. They also made a neat sound when whacking two big erasers together.

This wonderful chore was often reserved for classroom misbehavior, so I got to be a regular eraser beater. It is also notable to point out, that hitting erasers against the school building and leaving white chalk marks is not advisable. It leads to a bucket of water, scrubbing, and further missed recesses.

White boards, smart boards, and laptops in schools have all but eliminated the chalkboard. Kids don’t have the pleasure of creating clouds of white dust, producing the distinct sounds of eraser clapping, or to be left with white residue on fingers and  pants.

It feels like this year has been like whacking erasers. Feels a bit like we’re being punished for something. We’ve been quarantined in our homes, banished to basements and spare bedrooms. Parents have been forced into balancing home-schooling and work demands. Many have lost their jobs or businesses. People trying to cope with funerals, weddings, and various celebrations, while being forced to stay apart. All this separation feels like we’ve lost another recess.

Then the race demonstrations have led to good conversations alongside of inflaming deep-seated tensions. Cities taking hits who were already hurting. Political posturing with polarizing stances.

It all makes me want to whack rubber erasers as loudly as I can. I’d just like to hide behind a cloud of dust or maybe erase as much of this year as possible.

When this is over, we’ll need to clean some chalk off the buildings. It’s going to take some long hard scrubbing to get us back to some sense of normalcy. I don’t think any of us are going to get through this year without some marks on our clothes and residue on our hands. We’re going to carry this with us a while.

One thought on “Whacking Erasers”