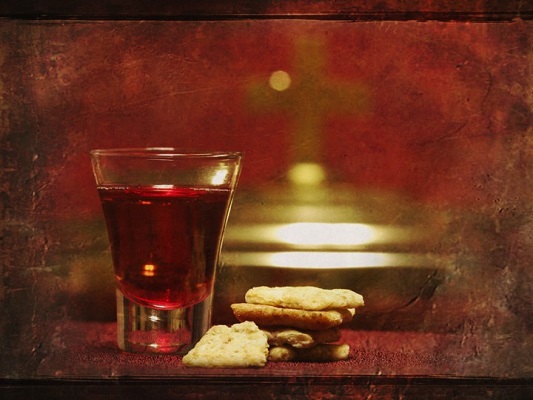 I was listening to a devotion on communion and was thinking about my experiences with communion. My first principal job was in a small Roman Catholic school in Sioux Falls. I learned all the hand signals and still can repeat the prayers, but the only time I was not able to participate fully in worship was during communion. They believe that the bread and wine actually become the body and blood of Christ. So it is a closed communion and is available to those within the fold that have met requirements as outlined by the church.

On the other end of the spectrum is the United Methodist Church which has an open table. Communion is available to young and old and basically there are no requirements for those who are able to receive communion. Within the UMC there are different practices – I’ve seen pastors use a full liturgy to pastors who basically say, “Come and get it.” I know of a UM pastor that has people eat all the bread and drink the juice after the service as they personally believe it becomes the body and blood of Christ. But I love to see children take communion, whether or not they fully understand the symbolism. I love it when people who are on the margins with the church take communion.

As part of my job, I spend time visiting donors. Many times we sit at the kitchen table and I’m always amazed at what people share with me. Very personal, intimate details about their lives. I am often treated to something to drink and a snack. Sharing and then sharing a weak cup of coffee along with store-bought cookies has become communion to me.

I did get a surprise one Sunday. Did you know the Lutherans use actual wine? No wonder they line up every week.