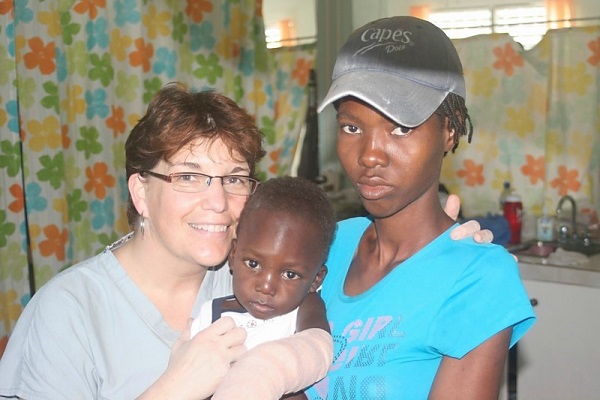 January 12, 2010 seems a long time ago and it seems like yesterday.

It was a trip that almost didn’t happen.  There was a terrible snowstorm and many of the roads across the state were closed.  The team of twelve was leaving from Rapid City so my son and I had to drive there by going way north and busting through drifts on secondary roads until the interstate reopened.  Then our flights were cancelled and a wonderful man rearranged our schedules so we could get to Haiti.   I remember making it to our site on LaGonave and thinking – it’s going to be a breeze from here.

Our team arrived on Sunday and the earthquake happened on Tuesday afternoon.  We had set up a clinic at the Celebrate Jesus compound and droves of people came for medical care.  People waited in the pews of the church to be seen by our medical staff.  I remember at the end of the day on Monday – so many people waited all day and would have to come back tomorrow to wait again before receiving care.

January 12, 2010 – 4:53pm – I was walking toward our pharmacy and heard this rumble.  It sounded like kids running on the stairs, but that couldn’t be.  Then it sounded like a train and that surely couldn’t be – there are no trains in Haiti.  The ground simply moved and it was disorienting.  People ran out to the open field and waited.  Some were a bit sick to their stomach from the movement but we joked, hey, we’ve just been through our first earthquake.

We went back into the clinic and then there was a major aftershock.  No more clinic that day.  Luckily one of our doctors, Garry Strauser, got a quick phone call out that we were OK.  Because that was the last direct communication we’d have for several days.

We didn’t know what had happened in the capital of Port-au-Prince.  We were about 25 miles from the epicenter of the earthquake but LaGonave is very rural.  No tall buildings, not as many people.  The night of the earthquake, the organizers didn’t want us to sleep in the building so we brought our mattresses into the open field.  I remember looking at the hillside and it looked like it had snowed – because there were several hundred people laying on sheets.  Too afraid to be inside.  There were many aftershocks that night and in the days to come.

On Wednesday we began to hear that this was a major catastrophe.  In Haiti when people find out about a death, there is a bellowing cry.  We heard too many of these over the next few days.  That night there was a worship service in the church and the people were singing and praying.  A voodoo group came up the path and began drumming and chanting loudly.  The church group began praying and singing louder.  The drumming/chanting and the praying/singing kept escalating.  Without understanding fully, it seemed like – “Whose God is stronger?”

My son, Ian, went in to the village about 20 minutes away to try to send email messages.  We weren’t in any immediate danger.  We had food and water.  It just wasn’t clear how we were going to get home.  We began to hear more and more that this was bad.  We could see boats and planes arrive that we later found were relief assistance.

On Thursday we actually started to receive people injured from Port-au-Prince (PaP).  It is amazing because LaGonave is an hour trip north of the city, a boat ride through the bay, and then our clinic was a bumpy 30-45 minute trip up the hill.  And they found us.  Lacerations, a broken hip and broken bones.  A woman who had burns from cooking oil and the doctors said she’d be in a burn unit in the U.S.  Too much trauma for our little adventure.  So we sent word that we were closing our clinic and we hauled all our medicine and supplies to the only hospital on the little island.  And we waited.

A couple months ago I was cleaning out emails on my home computer and I found a file that my wife had created.  It was all the announcements from the Dakotas United Methodist Conference, the emails people were sending with ideas or ways to get us home, and the prayers.  I broke into tears as I was so humbled and so appreciative.  I’ve said at no other time in my life had I felt prayers like this time.  There was a palpable sense that people were praying for us and for me.  This confirmed that so many people cared and were working on our safe return.

It was also so much harder on our families than for us.  You were seeing all these terrible images and for a day or so, we didn’t even know what had happened in PaP.   My wife, Sharon, later explained when she heard the news of the earthquake and her husband and son were there.  Someone had seen my dad walking across DWU campus, looking troubled, and later found out why.  These and many more stories like it break our hearts because we were fine, we just had no way to communicate.

The Wesleyan Church has a compound in the main city on LaGonave and they sent a message for me to come.  They had a way for us to get off the island.  But first they were rescuing 15 youth from the epicenter area and we would combine with our teams and others and find our way home.  All of us would travel across the bay in a lobster boat.  Most would go north by truck and have a very bumpy, dusty, dirty ride and leave from a cargo plane in the north.  The remaining ten of us would go into PaP and leave from a private Amway jet that was delivering doctors and medical supplies.

The ride through PaP was unbelievable.  Five story buildings that had pancaked into one story buildings.  Rubble and fires everywhere.  The smell of death lingered in the air.  Obviously, we’d avoided being in the wrong place at the wrong time.

There are so many stories, but we almost didn’t get into the airport.  Lines of people were trying to find a way out of the country.  We knew we had a plane from Amway but they wanted to know the tail number and that didn’t get communicated to us.  Finally I asked to see a representative from the U.S. and Officer Rodriguez came in his full army fatigues and automatic weapon and after explanation, he marched us through the hordes.

The relief effort, even in the early days, was incredible.  Supplies had been flown in from around the world – Spain, Canada, Argentina, England, U.S. and so many other places.  Logistics were terrible.  There is ONE runway in PaP so getting airplanes in and out was a nightmare.  There is one main gate for supplies so guess where the throngs of people were – of course at the gate.  I went with the Amway Team leader to show him the gate and I asked a military person what was going on.  He said it’s falling apart which meant they were going to close the only gate for supplies to get out.  It’s easy to judge the relief efforts, but it was an unbelievably difficult set of circumstances.

In retrospect, we had it so easy.  Our friends and missionaries, Joe & Shirley Edgerton from Kansas had to identify and bring the body of Rev. Sam Dixon back to the U.S.  They made a last minute decision not to go have lunch at the place where Sam and others died.  We were in a rural area with no tall buildings.  We didn’t have to deal with broken bodies and lost lives and dust and confusion and pain of a magnitude greater than the earthquake.

A few months after the earthquake I was sitting in my car at a stop light.  A concrete truck came up behind me and the vibration and noise gave me a startle.  I remember slapping my hands down on the seat with a moment of panic.  I’d say that is where many of the people are at in Haiti.  The memories are below the surface, but not that far below.  Everyone lost a friend, relative and everyone wonders if there will be a next time.

A year after the earthquake, I went to LaGonave by myself and interviewed elderly people, pastors, and village leaders.   The earthquake didn’t damage much on the island, but food and supplies became much more difficult as most items come from PaP.  The aid that came from around the world didn’t make it too far outside PaP and certainly not much to LaGonave.  This trip solidified for me that I can’t change the world, but I can help make small changes in one little corner.

It lead to writing a couple small refection books that raised almost $20,000 in funds to help.  People wanted to hear the stories and they responded – and continue to respond.  It led us to begin a nonprofit – LaGonave Alive – to work mainly in the areas of:  School Scholarships –(People have generously supported about 25 students a year and we’ve now graduated nurses, a lawyer, technical people and many are still in elementary and secondary classes); Health Care – (Dr. William Hyppolite is completing medical school in the Dominican Republic and when we have funds we do mobile clinics, sponsor medical teams); Women, Children, Elderly – (We assist women’s groups who protect these groups, the Haiti Children Christmas has exploded over the past five years and this year 850 children received a toy and meal, we have supported orphanages, and our Elderly Food Giveaway currently  has 53 people receiving food twice a month and are working on connecting this to a food packet program.

So how did the earthquake impact me?  I started to write more.  I know that life is fragile and to try not to waste moments.   I know that prayer impacts and connects in ways we don’t understand.  I know the love of my family and friends is deep.  I know God has opened pathways to get to know, love, and work with kind, generous, funny, needy Haitian people who have given me way more than I’ll ever be able to give back.