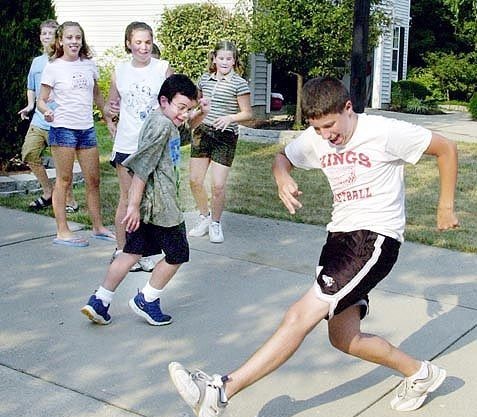 My older brother is into games. Like incredibly into games. He has more games than I have clothes, belongs to a gaming society, and has invented several games. My brother actually met a guy at a gas station to trade games (I still imagine trench coats, sunglasses, and fedoras being involved).

Our grandkids are getting into games.  The two year old hasn’t quite gotten the handle on Hide and Seek. More like giggle and yell, “Found You,” when he is supposed to be hiding.  Our five year old is starting to get the knack of Old Maid and Go Fish, and other classic games.

There are hundreds of card games, board games, and now electronic and simulation games. If you have nothing to do for weeks, Monopoly was always fun. My wife generally beats me at Sequence, which is a card and marker game and I’m pretty sure she cheats. Our family played Whist and Rook, have always loved Pinochle, but here are a couple games that stand out for me.

The neighborhood game we played often as kids was “Yards Off.”  Some call it “Kick the Can,” but one person is designated as “It” and they count with their eyes covered. A ball was placed in a designated spot, usually by the clothesline pole. Everyone else runs and hides.  The “It” person tries to find and tag the ones hiding before they kick the ball, then they go to “jail” and stay.  If the ball gets kicked before the person gets touched, everyone was allowed to escape from jail and everyone goes back to hiding.  If everyone gets touched, the game is over.

The trick for “It” was to get out far enough to find and catch the others without getting too far away from the base to protect the ball.  There were different strategies.  Some stayed close to the ball in hopes the “hiders” would get bored and venture out to be caught.  Some, usually the fast runners, went to find and tag those hiding in the neighborhood. My two favorite hiding spots were the peony bushes and behind the oil tank by the church.

Mancala is a game that was played when I was an exchange student in Ghana.  The definition according to Wikipedia – Mancala is a generic name for a family of 2-player turn-based strategy board games played with small stones or seeds and rows of holes or pits in the earth, a board or other playing surface. The objective is usually to capture all or some set of the opponent’s stones. Versions of the game have been played for at least hundreds of years around the world.

Here’s my description – Mancala is a game where four small stones were placed in pits in the earth and I always got wiped out by my opponent, even small children, who laughed derisively at their opponent.

So make it game day. Dust off a game and pull it from the shelf. Or just meet my brother at a gas station.