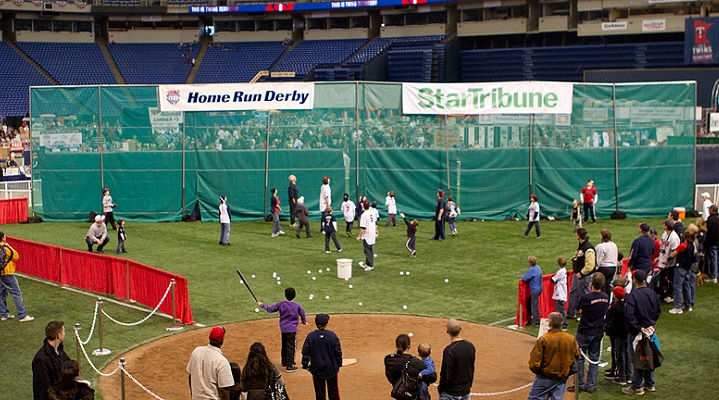 The last few years it has been hard to admit, but I am a Minnesota Twins fan. Have been since I was a kid sitting on the back steps and listening to them on a transistor radio.  A few years ago we went to the Twins Fest. It is a big event to get autographs, take some pictures, see and buy baseball memorabilia, and kids can participate in skills areas – pitching, hitting, catching flies.  It’s a lot of waiting in lines, but fun if you are a fan.

I was in line for a tour of the clubhouse and the line formed behind home plate. At home plate was the homerun derby.  They had set up a 15-foot high mesh fence between 1st and 3rd base and the object was to hit wiffleballs over the fence for a homerun.

In the line was a guy in his 20’s, while most of the other people in the line were kids. I was watching this man closely and was amazed how well he controlled the bat and hit the ball.  Two guys behind me in line were making comments about this 20-something year old, like, “What’s he doing in this kid’s game?” “Sure he can hit the ball, he’s 25 years old.”  “He should get out of there.”

When this man finished his last hit, he walked to the next kid in line, handed him the bat with his left hand and his right arm dropped to the side. The two guys behind me finally noticed what I had seen all along – he had no right hand.  “Oops,” said one of the two guys.

Oops was exactly right. These weren’t bad guys, they simply hadn’t seen the whole story.  I thought that was a perfect example of what happens to all of us in life.  Unfortunately, some people’s struggles are not always so visible.  A friend refers to it as the “personal hells”  everyone has that we know nothing about.  We probably should be saying “Oops” about someone every single day.