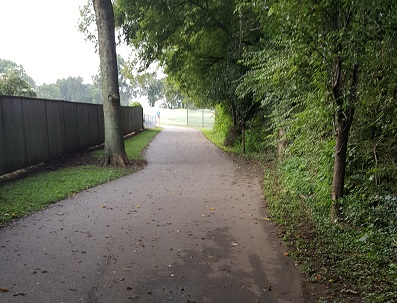 I was in Nashville for meetings and found a walking trail that surrounded a golf course. A very nice, wide trail that also goes through the woods and crosses a meandering creek. It is a neat path with many bikers, runners, and walkers.

The first day I started walking and got to a point where I wasn’t sure if the trail made a complete loop and wasn’t sure how far it would yet be to go. Of course there were maps, but I do my best not to read or follow those. So I thought I’d better turn back and go to my starting point.

Two days later, I went back for another walk and decided to go the other direction. At almost exactly the same point where I had turned around before, was half way around the trail. In other words, if I’d have continued on around the corner, I would have completed the loop in the same time or distance. I feared the corner.

I’ve had great jobs and truly fine people to work with, but I can think of two specific times where I feared the corner and took another job. It may have been the trail would have ended or it could have been a long path or it could have just been a corner on the way.

So where else have I feared the corner?

Just when I get to exercising regularly and eating well, I turn back.
Instead of reaching out and do more to serve others, I turn back.
When I get serious about reading more, spending more time in devotions, I turn back.
Plans are to develop a hobby, set up a podcast, and then, I turn back.

My hope is to round the corner more. Might just be where I should have gone anyway.