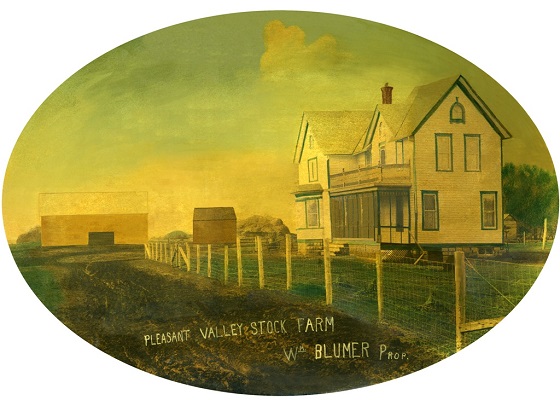 Grandma Blumer and I always had a special relationship.  I think it was a matter of fit.  She was a Norwegian that spent her lifetime trying to fit into a German community.  I am a middle child and like many middle kids we’re pretty convinced we don’t fit into our family and even though we look like everyone else we generally assume we were adopted.

We went through some things together.   The biggest event was a huge hailstorm that took out all the windows and beat up the siding on the west side of the farm house.  Grandma, my older brother, and I sought safety in the dirt basement and Craig asked me what we should do.  Apparently I said, “Pray, dummy, pray.”  Grandma told that story for years.  She had us collect the golfball-size hailstones to put in the freezer as she was sure Grandpa wouldn’t believe the hail was that big.

But mostly we were just buddies.  Gma made wonderful homemade donuts.  There would always be an ice cream bucket with donuts in the pantry.  But it got to the point when the family would visit, grandma would have a bucket of donuts just for me.  I’d shared the donuts only after s-l-o-w-l-y savoring a couple in front of my siblings.  They hated it and it was AWESOME.

Gma loved listening in on the party line.  For those of you not born in the past century, phones in rural areas had a distinct ring for each family but you could listen in on other conversations.  The real party was watching grandma shush us while she was listening in to gather the latest gossip.

But maybe what defines our relationship was the day of Gpa’s funeral.  We were waiting in the basement of the church and Gma was sitting alone.   I wanted to say something, but all is could do was sit by her and hold her hand.  I can’t remember saying anything.  I just sat with her and held her hand.

It has helped me realize two things.  The relationship between grandparent and grandchild is very special.  And when you’re with people who need you, sometimes the best thing you can do is hold their hand and say nothing.

2 thoughts on “Grandma B”